Lassen County Office of Education Supporting Students for the Future 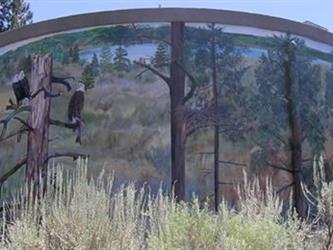 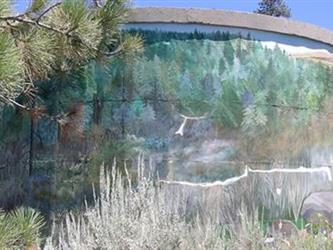 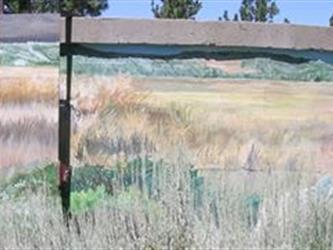 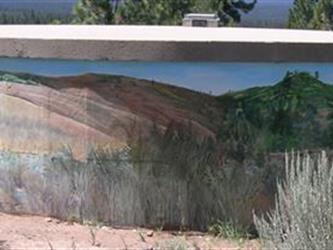 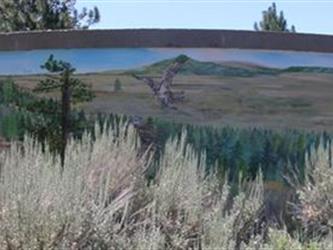 Susanville's history is represented in the Eastman mural. The founder of Susanville's Eastman Photography, in the 1920's, Jerrie Eastman's life is featured in two scenes. In the central scene, Mr. Eastman is leaning against a Model T Ford. The Model T was used to carry photographic equipment to shoots. A smaller mural overlapping the central scene pictures a bi-plane which may have belonged to one of Mr. Eastman's partners.

Links: Eastman Collection in the Online Archive of California (13218 images from his collection are available on-line)

Mural in the Pioneer Bar, Main Street, Susanville #2 on map 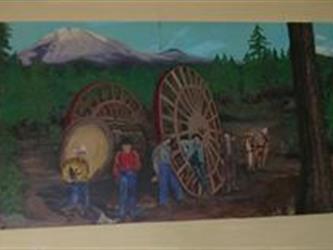 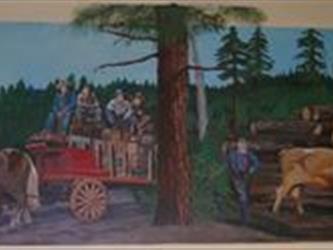 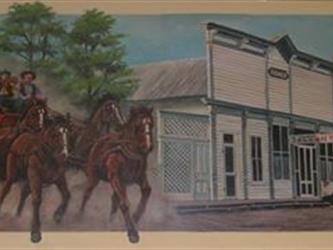 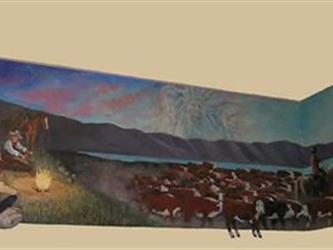 The oldest established business in Susanville is the Pioneer Bar. The mural represents the cowboys of the old west, a stagecoach, and covered wagons. Can you find the barefoot boy in front of the Pioneer?

Ben Barker, the artist, can be found next to the stack of logs holding a walking stick. Bill Bayer, the owner of the Pioneer, is reading a history book while deer watch from a distance. Bayer's brothers are the four men sitting on the wagon. 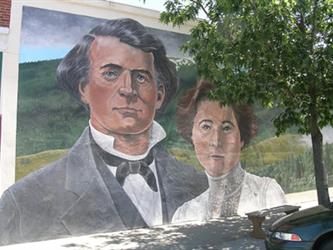 Isaac Roop left his three children with their grandparents in Ohio when his wife died. He traveled to California. Susan, his first child, was born in 1841. She returned to Honey Lake Valley and her father in 1862. She kept house for Isaac at Roop's Fort.

Roop's Fort was built in 1854 by Isaac Roop, Ephrim Roop, William McNaull, Captain Weatherlow and others. It was known as Roop's House. The meadow around the house was a stopping place for pioneers traveling on the Nobles Emigrant Trail. Pioneers on their way to the Northern California gold mines could rest, feed and water their animals. They purchased provisions before completing the trip. Trade was made (whiskey, tobacco, and a few staple articles) from the town of Shasta. On April 26, 1856, the official paper declaring this area the State of Nataqua (an Indian word meaning woman or wife) was done at Roop House. The President was Peter Lassen and the Secretary was Isaac Roop. Roop House was also the site of the Sage Brush War in February 1863.

The town was first called Rooptown. It was named Susanville in 1858 to honor Isaac Roop's daughter. Susan Roop married A.T. Arnold and had many descendents who still live in the area.

Cattle Ranching Mural #4 on the map 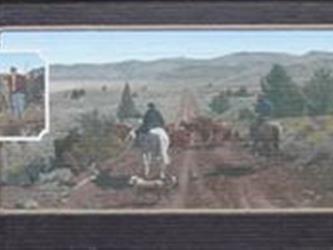 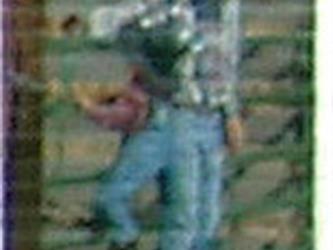 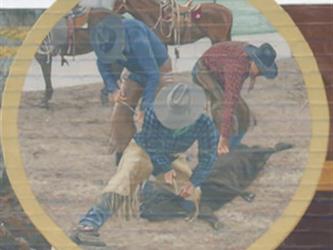 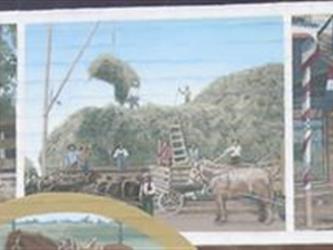 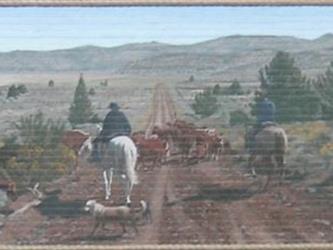 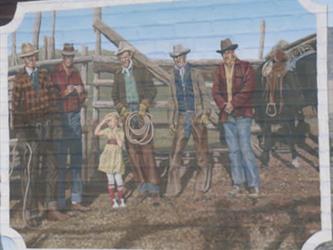 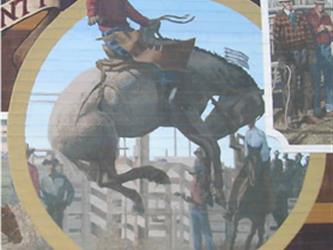 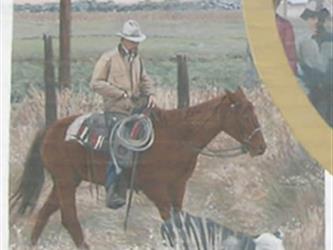 The history of cattle ranching is represented in this mural. The artist lived in Susanville while painting the mural. Jack Hanson, a local resident, stands at the fence with one of his sons.

Our Ancestors, Our Future #6 on the map

Seven ancestors of the Indian culture are honored in this mural. In the background is Honey Lake Valley, Thompson Peak, Mt. Lassen and the petroglyphs. The mural represents all the colors of Lassen County - the deep indigo in the sunset, the soft shades of the desert, and the frost glitter of winter.

The mural at this site is important because long ago the older Native Americans gathered here. The building once was the Golden Rule Grocery.

From left to right:

Tommy Tucker: Tommy Tucker, the first Lassen County man to die in World War I and is buried at the Susanville Cemetery.

Maude Sailors: Maude Sailors worked at the age of 10, on ranches, at the mill, and as a forklift operator. Because of her way of life and her commitment to Native America, Maude is on the mural.

Gladys Servillican Mankins: In Janesville, Gladys Mankins sponsored the Bear Dance every year until she died.

There are more! Keep reading!

"Old Man Joaquin": Old Man Joaquin didn't have a first name. His name was Sau Wa-Be, which means Sagebrush. Old Man Joaquin lived near Eagle Lake in Papoose Meadows. He had many daughters. Today a large settlement of Joaquin people lives on the Rancheria.

Chief Winnemucca: A Paiute, Chief Winnemucca was the peace seeker. With Isaac Roop he signed a treaty for peace for settlers in the Honey Lake Valley. 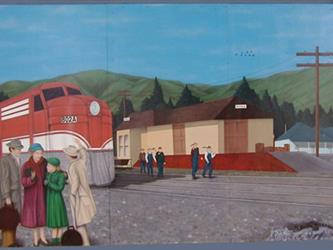 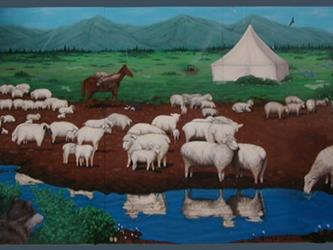 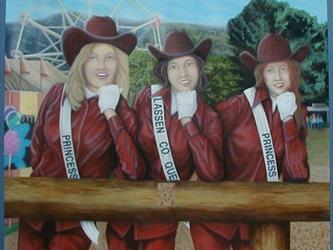 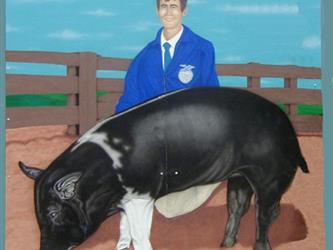 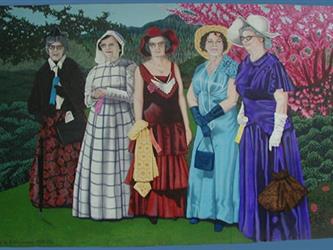 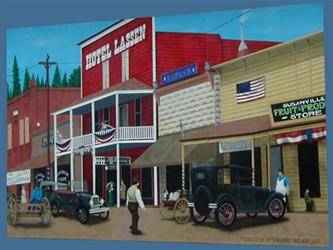 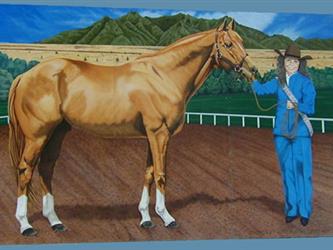 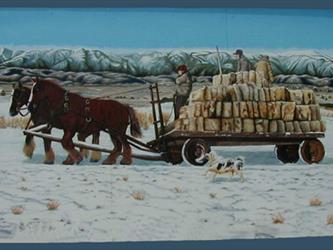 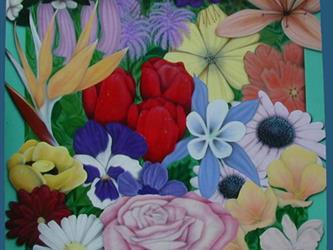 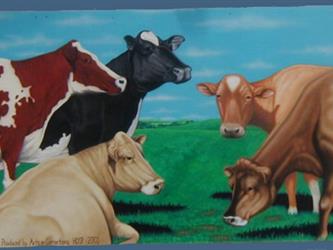 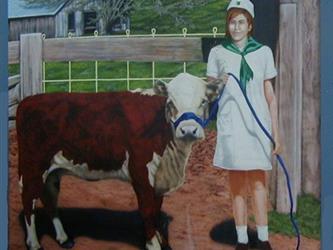 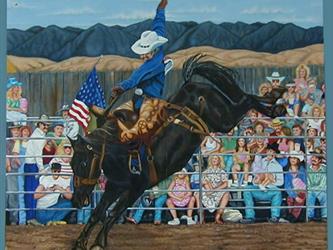